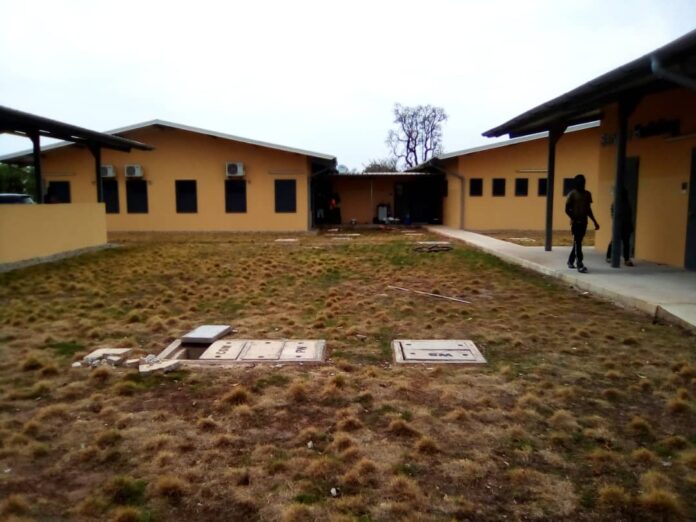 The Member of Parliament (MP) for the Bole-Bamboi Constituency Hon. Alhaji Yussif Sulemana on Thursday 22nd, April 2021 visited the Bamboi Polyclinic in the Constituency

Alhaji Yussif Sulemana speaking to Bole based Nkilgi Fm during inspection of the Ultra-Modern, said he is over excited about the 32 capacity beds facility and will work extra harder to ensure the facility is put into good use.

Alhaji Yussif Sulemana said he could remember asking the then minister of health in Parliament in 2017, when the ultra-morden health facility which is part of the Five Ultra-Modern hospitals will be completed.

He said the minister said the project will be completed in four years time.

The MP said he is happy the project is almost completed but unfortunately the contractor complained of facing water problem because the land only have water on the top surface, which is the only problem they think the polyclinic will be facing when Commissioned.

Alhaji Yussif Sulemana promised to call the Ghana Water Company limited immediately after the inspection to see how the can get the polyclinic a good water facility.

The Bole MP commended the contractor for the wonderful job done and said even some District hospitals are not up to that standard of the Bamboi Polyclinic.

The Assemblyman for Bamboi electoral area Hon. Ernest Agyapong thanked the MP for always making himself available at all times when the need his support.

Hon. Ernest Agyapong said the MP is developmentally oriented and has been pushing for the development of Bamboi since his assumption in office as an MP for the area.

Meanwhile the MP for the Bole-Bamboi Constituency Hon. Alhaji Yussif Sulemana has brought 200 bags of sugar to Bole to be donated to the Muslim Community in the Constituency.

Speaking to Bole based Nkilgi Fm, Hon. Alhaji Yussif Sulemana said Parliament is on recession and he has to come down and support his people with sugar which he has brought.

Hon. Alhaji Yussif Sulemana said he brought 200 bags of sugar and will be buying more there is shortage during the sharing.

He added he will make sure every part of the Constituency receives some bags of sugar to aid the with the fasting.

Alhaji Yussif Sulemana further told Nkilgi fm the people of his constituency voted for him and his father, former president John Dramani Mahama massively during the 2020 general elections and so he will continue to embark on a “Thank you tour”.