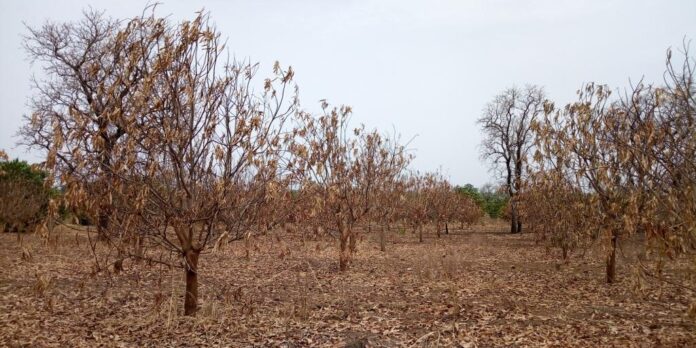 Fire has consumed a 15 acre Mango and Cashew plantation at Yipala near Damongo in the Savannah Region.

Speaking exclusively to Bole based Nkilgi FM, Mr Seidu Amanga lamented about how half of his 30acre plantation got consumed by farmer on the very day he was going to the farm with a tractor to weed in the farm.

Mr Amanga said he started the farm with just 2 acres of farmland but has since expanded it to 30 acres after he had support from EDIF Ghana.

He said the support has since ended making him and many other farmers invest into the farming activities with his personal funding source.

He added that he is very much discouraged anytime he thinks about investing in farming following the fire destruction in his plantation.

He said the Moslem Ummah mostly depend on himself and his colleagues for mangoes especially during the fasting period.

Mr Amanga has therefore appealed to the government and other bodies to come to his aid since most of the crops are destroyed completely and needs to be replaced.

Asked whether he had reported to the higher authorities, Mr Amanga said he made a report to the West Gonja Municipal Assembly and the office of the National Disaster Management Organization but nothing has come out of that.