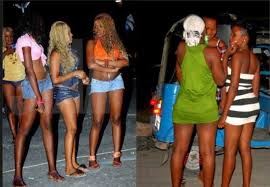 A Prostitute at Yapei in the Central Gonja District of the Savannah Region last Thursday seized three (3) guinea fowls and some quantities of eggs from a middle aged man (name withheld) after he failed to settle her service.

The man who was on his way to the Yapei Thursday weekly market last week with his 3 guinea fowls and eggs decided to pass through the popular prostitute base in Yapei to satisfy himself before proceeding to the market to sell the guinea fowls and the eggs.

After satisfying himself, the man told the lady he was on his way to the market to sell the animals and will comeback to settle her after seeling his itmes.

The lady became furious and seized the fowls and the eggs and went ahead to pour unrine on the poor man.

It took young men around some time to be able to whisk the man to the riverside at Yapei to wash him down from the stench of the urine.

The man who had refused to leave the room of the prostitute for fear of other village folks seeing him had to be forcefully taken out by the boys around.

The prostitute who narrated the incident to people around said the young men do come around and after they satisfied themselves then turn round to accuse her of not paying royalties to the traditional council meant for development in the town.

She said they always have affairs with them without paying especially the popular young men who claims to be land owners.