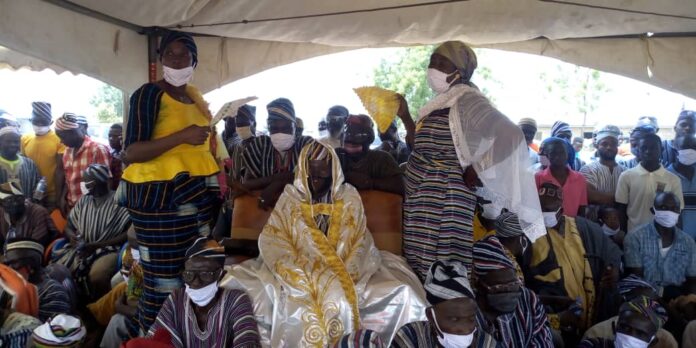 The Paramount Chief and Overlord of the Kusawgu Traditional Area in Central Gonja of the Savannah Region, Kusawguwura Alhassan Soale Bunyanso (II), has named a yet to be established Senior High School in Yapei after the Vice President, Dr. Mahamud Bawumia at the outdooring ceremony to climax his enskinment as the Paramount Chief of the Kusawgu Traditional on Sunday 21st March, 2021.

He said his Traditional Area with about twelve (12) Junior High schools is without any second cycle institution. He has therefore allocated a parcel of land for the construction of a Senior High School.

He said his Palace will soon write to the Ghana Education Service and the Central Gonja District Assembly to take steps to ensure a smooth take-off of the school next academic year to bring Secondary Education to the door steps of his people, thereby preventing parents/guardians from renting rooms in Tamale, Buipe or Damongo for their wards who are largely offered Day status in the Senior High Schools they are placed.

Kusawguwura Alhassan Soale Bonyanso (II) also called on the President, Nana Addo Dankwa Akufo-Addo to take steps to fulfil his promise of carving a New District from the Present Central Gonja District which is largest and most populous District in Savannah Region.

While paying glowing tribute to his predecessor, Kusawguwura Samuel Sulemana Ewuntomah kunkarga (I) for his contribution to the development of Kusawgu and beyond, he called on the four (4) Royal gates in the Traditional area to unite to find lasting and amicable solutions to the succession issues in the Traditional Area.