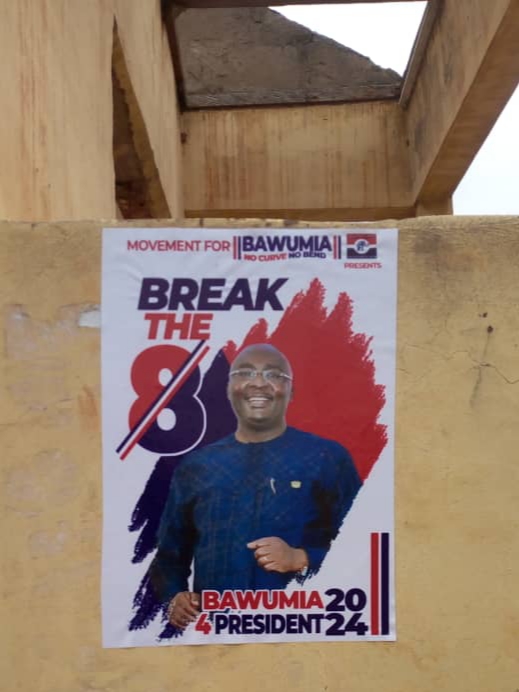 Posters of Vice- President Dr Alhaji Mahamudu Bawumia as the Presidential Candidate of the New Patriotic Party (NPP) have flooded Damongo, capital of the Savannah Region of Ghana.

A poster that can be found on trees, street light poles, electric poles, market and private buildings Damongo have a picture of Vice- President Bawumia has different messages on it including ”Movement for Bawumia”, ”No Curve No Bend”,
“Break The 8” and “Bawumia 4 President 2024”.

The posters have generated debate in Damongo town as many people are wondering that just in less than two weeks after the Supreme court declared President Akufo-Addo as winner of the 2020 elections, posters of the 2024 election have started emerging with some arguing Akufo-Addo’s government is yet to take shape but there is a campaign to succeed him.

Many party supporters are pointing accusing fingers and suspecting former Damongo Constituency Chairman and failed Regional Chairman aspirant for the NPP Nana Aboagye Kwame as the brain behind the posters in town since he is known confidant of the Vice President in the Savannah Region.

There have been calls for Dr. Mahamudu Bawumia to be considered for the flagbearer position of the NPP on the basis that he is the most competent person to take over from Nana Addo who is serving his last term as president.

The NPP leadership in the Damongo constituency were contacted by Nkilgi Fm but none is yet to comment on the posters circulating in town.

But a known supporter of another NPP personality who is ssid to be lacing his boots to contest, that is, Minister of Trade and Industry Mr Alan Kyerematen when contacted to comment said he does not want the name to be mentioned because he is vying for a position in President Akufo-Addo’s government. The Alan supporter in Damongo said late Vice- President Alhaji Aliu Mahama had the intention to contest for the flag bearership of the NPP in 2007 but, he never acted or caused his supporters to behave and act in a manner that could derail or shift public attention from President Kufour and his Government’s efforts then.

“Alhaji Bawumia and his agenda agents are selfishly and comfortably sabotaging President Akufo-Addo and his government”; he wrote to Nkilgi Fm’s reporter.