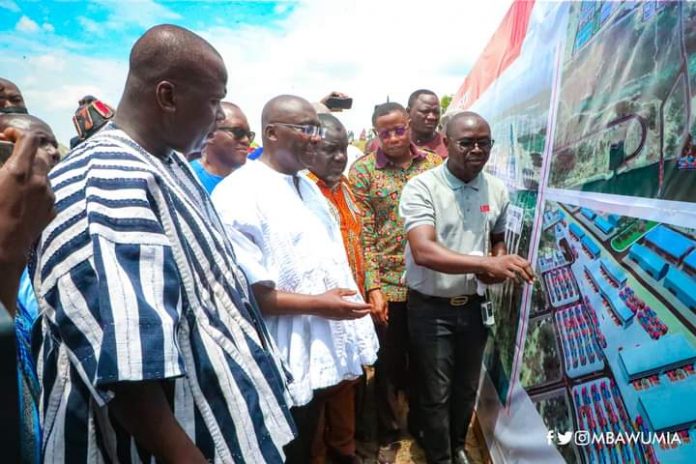 Dr Mahamudu Bawumia has said the establishment of the Debre Marine Inland Port on the black volta River in the Central Gonja District of the Savannah Region will decrease general transport cost of international cargo to importers and exporters from the middle and northern parts of Ghana including the Sahel sub-region and also enhance the export of various produce such as Cola nuts, Shea butter and cotton.

In his address at the sod cutting ceremony for the construction of the Debre Inland Port on 22nd July, 2022, the Vice-President said the project will further enhance job creation in the area with an estimation of over 1000 to 1200 direct and indirect jobs in the area that will bring relief especially to the youth who normally travel far from home in such of nonexistent job and appealed to the chiefs and people of the Debre traditional area to support the completion of the project for the betterment of the region and Ghana as a whole.

Dr Mahamudu Bawumia in further said the sod cutting to commence the $200 million Debre Inland Port project also included an extension of a 1000 acre industrial park at Yapei with the focus of developing agro-processing to add value to agricultural products in the region.

He said the first phase of the project will be operational within the first half of 2024 and the entire project is expected to be fully operational by 2025 and that the Debre Inland Port project has been on the drawing board of successive governments for over a decade.

According to government, the project is the single biggest project to come to the Savannah Region.

The Chief executive officer (CEO) of LMI logistics Mr Kojo Aduhene said the project is expected to provide competitive transport system that will transport cargo containers from the south to the north using the Volta Lake.

He indicated furher that the project will serve as a catalyst for industrialization of the country by reducing the cost of annual road repairs by government due to movement of heavy duty trucks.

“Government spends billions of Cedis on repair works done on our roads due to long distance and pressure on the roads and once this port is here, all long and heavy duty vehicles from the northern sector including our neighbours in Burkina Faso, Togo and La Cote d’Ivoire will not have to move all the way to Tema to clear their containers, he added.

Mr. Aduhene promised to extend pipe-borne water from their plant to the people of Debre, Mpaha, and all the surrounding villages when it is constructed and employ locals when it comes to jobs.

The Minister of Transport, Kwaku Ofori Asiamah, stated that the government’s priority is to enhance the contribution of inland water transport and safe and efficient transportation of goods and people.

Savannah Region Minister Saeed Muhazu Jibril noted that the Debre Inland Port Project is the best thing to have happened to the region.

He called on other investors to take advantage of the numerous investment opportunities to invest in the region.