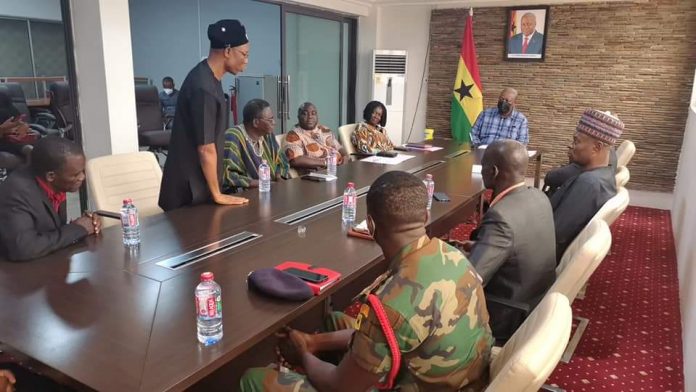 The Savannah Region MP’s and the family of the late Hon. Soditey Dari, led by Mr Thomas Senor Bebe and Dr. Margaret Chebere where at office of former President John Dramani Mahama to officially inform him and as well invite him to the final funeral rites of the former MP for the Sawla-Tuna-Kalba Hon. Soditey Dari.

Speaking to the team, former President John Dramani Mahama said he and the late MP used to call themselves ‘Gbaga’ and that the late MP was a nice person who he has been in touch with for a long time.

The team also paid a courtesy call on the Minority leader of Parliament, Hon. Haruna Iddrisu who was supported by the Minority Chief whip Hon Mubarak Muntaka to receive the delegation.

The delegation ended the day with a courtesy call on the Rt Hon Speaker of Parliament, Hon. Alban Sumana Kingsford Bagbin who was also joined by other High profile persons including Hon Kofi Attoh, Hon Bede Zeideng as well as other senior stuff of Parliament to receive them.

The burial and final funeral of the late MP will take place on Saturday 2nd July, 2022 with the Thanks giving taking place on Sunday 3rd July, 2022 at the Sawla Roman Catholic Church.