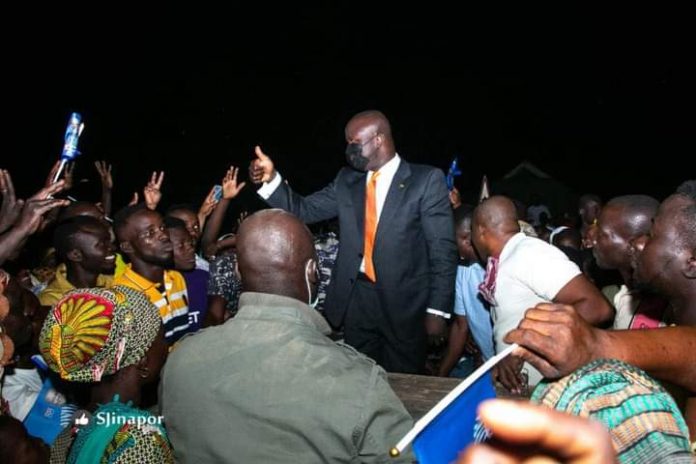 Hundreds of women in the Damongo on Thursday 23rd December, 2021 night took to the streets of the town to welcome the Member of Parliament (MP) for the Damongo Constituency and Minister for Lands and Natural Resources Hon Samuel Abu Jinapor.

The women who waited at the Damongo main lorry station for about five hours finally welcomed the MP into town amidst dancing and singing with many of them claded in the MP’s shirts.

It took the MP close to an hour to get out of his vehicle to address them.

One of the women who spoke said it is a blessing to have someone like Hon Jinapor as the MP for Damongo since he is not divisive, do not discriminate and very accommodative.

She added that they the women have confidence in him and are always ready to support him.

The leader of the group further stated that seeing the MP on the floor of Parliament and raising high the flag of the Damongo Constituency is what always makes them proud.

The MP for Damongo on his part said he is very much grateful and enthused for the way and manner he was ambushed adding that it is very awesome to be back home after an eventful year.

Hon. Jinapor disclosed that the Constituency Women’s Endowment Fund he started in the Constituency would have the women of Damongo township fully attended to immediately after Christmas since the team is almost done with the disbursement in rural communities.

He tasked the women to be patient and wait since as early as January, they will also get their share of the money.

On water, the Damongo MP said the water project of the town is ongoing and that he has directed all boreholes in and around the municipality to be fixed as soon as possible.

He said water would be mechanised from Broto to the main Damongo tank to ease the burden on the women who over the years have been struggling to get water for domestic use adding that the water crisis situation would be a thing of the past for the people of Damongo through to the Mole National Park.

It would be recalled the women in the Damongo Municipality contributed and organized a Qur’an recitation for the MP just some few weeks ago.