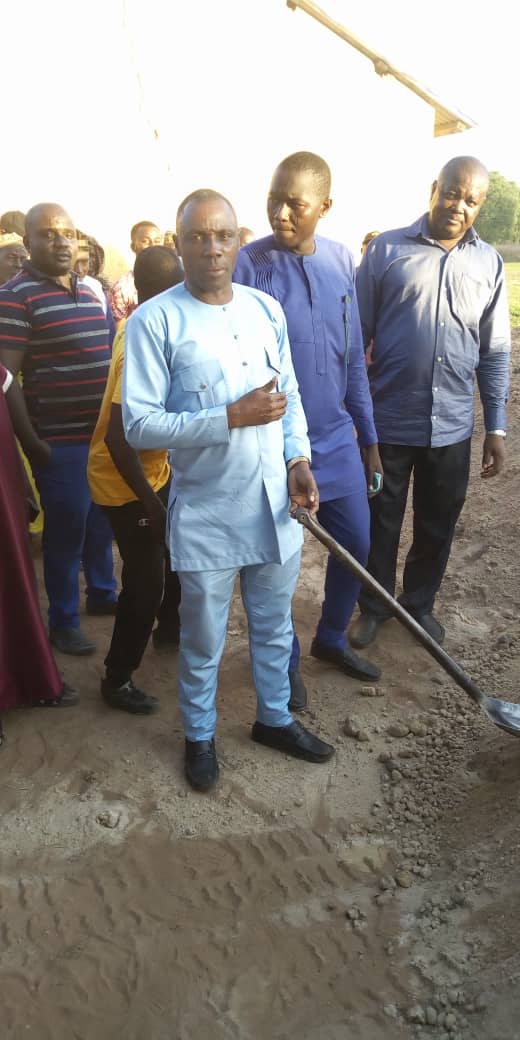 The project which is expected to be completed in the next 3 months will replace the old structure which is posing danger to the pupils and teachers in the school.

In a brief encounter with a section of the community during the sod cutting ceremony to commence the construction of project, Hon. Kusubari said the building has been in the radar of the assembly going into the year 2022 and he will ensure it is completed in time for the kids to be able to use it next term.

Giving a background history of the old block, the MCE said the Nabori community in the year 1983 came together in a form of communal labour to put up the structure.

He said the NPP government under former President J.A Kuffour with the late member of Parliament for the Damongo Constituency, Hon. Alex Seidu Sofo as the MP renovated the structure.

The former DCE for then West Gonja District Madam Janet Jambia also furnished it for students in the school to use.

The MCE added that the building never saw any renovation leading to it’s dilapidated nature which another NPP government is under President Nana Akufo Addo and himself as the municipal chief executive is replacing with a new structure.

He explained that he has visited the structure twice and was ready to work on the building only for the same building to be in the media with the assembly member for the area appealing to the general public, NGOs and philanthropist to save the lives of kids in his electoral area since they were studying under a death trap.

He took his time to explain why the Nabori community may not get a health center and a Junior High School block for now considering the nearness of the community to the next village Yipala which currently has the two.

The Assembly man for the Yipala-Nabori electoral area, Hon. Iddrisu Rahmani in an exclusive interview with Bole based Nkilgi FM thanked the West Gonja Municipal Assembly and the MCE for the swift response in putting up a structure to solve the problem of studying under that deadly structure which the MCE has authorised to be demolished as soon as possible and kids allowed to study under trees and a possible temporal structure to pave way for the construction of the new block.

He said residents in the entire Nabori community will sleep with both eyes fully closed since the structure which he described as a death trap with their kids studying there was giving them sleepless nights.

He said the development of every area is a gradual process and will use that opportunity to appeal for portable drinking water for the community after the building which is expected to be completed and handed over to the community in February 2021.

It would be recalled that on the 24th November 2021 the Assembly man for the Yipala-Nabori Electoral Area Hon. Rahman B. Iddrisu was in the media appealing to the government, NGOs, philanthropist and all stakeholders to come to the aid of his electoral area by building a classroom block for pupils of the Nabori Primary School before the building collapses and taking innocent lives of the pupils and their teachers.

The news went viral with varied opinions as to why the assembly man never passed through the right channel for the classroom block to be built for them.

Whilst some praised him in the approach he used, some also described his approach as a propaganda to paint the assembly black by playing politics with the issue since the assembly man is the deputy organiser for the opposition National Democratic Congress for the Damongo Constituency.

Meanwhile, heaps of sand is already loaded for moulding of blocks for the commencement of the construction of the project.