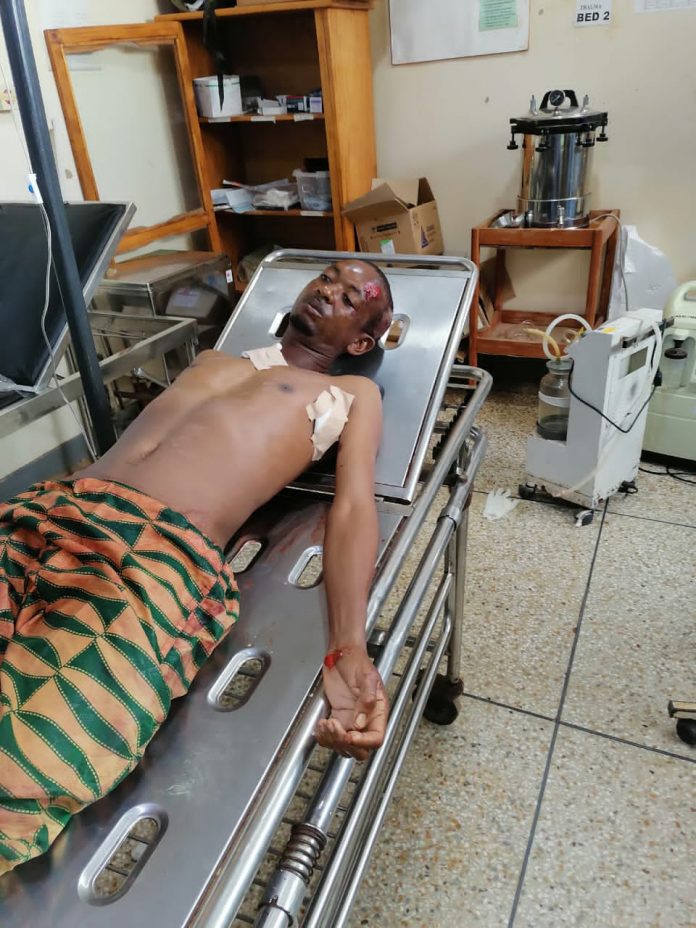 A Fulani welfare group called Tabital Pulaaku International is challenging the circumstances under which some Fulani suspected Armed robbers were killed in the Bole District of the Savannah Region by the Police Intelligence Directorate from Accra.

Speaking to based Nkilgi on 26th October, 2021, Mr Arhmed Barry who is the Organiser of Tabital Pulaaku International said their investigations after visiting the Savannah and Nono East Region Police Command as well as the site of the shooting indicate the police picked up the suspects from their homes at Sawla and Bole but shot the three at Wasipe in Bole District on the road side with two dying in cold blood.

Arhmed Barry said it was unfortunate for the police to make a statement that the alleged robbers where wielding weapons when they we in handcuffs.

He said from their investigations, one of the suspect Ali Igudu is the Fulani chief in Sawla in the Savannah Region and own a house which is opposite the Sawla Police charge office and that about 7 police officers are renting there.

Organiser of Tabital Pulaaku International again said after the Police picked Ali Igudu, one Iddrisu and Dramani they were on their way and got to the Tinga police station in Bole District where they stopped and spoke to the police and left.

He said at an area known as Wasipe they brought them down in handcuffs and they started asking them questions that they heard they are the notorious armed robbers around the area.

According to Arhmed Barry, Ali Igudu told the police they don’t know about anything and that by the time he (Ali Igudu) realised he heard a gunshot and before he realised again they shot at him and he was on the ground.

Ahrmed Barry said the Fulani Association is completely condemning the killing and that this is not the Ghana police they know.

He said they police are there to protect lives and properties and not to be shooting innocent people.

“If you claim that someone you found as an armed robber that he was going to show you where he was hiding his weapons and you going with the person in handcuffs how can he make a phone call to call somebody to attack you?” Mr Barry asked.

Meanwhile a statement Taabita Pulaaku International to buttress their case said the report filed by the police on the killing incident in the Bole District is false and that the police need to be exposed.

The statement signed by Mr Musah Barry who is the General General Secretary of the group said at about 1:00am on the night of the killing, police men forced their way into the compound of the Fulani Chief of Sawla, Chief Ali and bundled him with brute force into a pickup with his wife and children looking on in utter bemusement and horror.

“Subsequently the same police men took the Chief to another house in Sawla and arrested Iddrisu an amputee Mossi farmer who lost his leg through a tractor accident” and “Both men were taken to Bole and a third man, Fulani was also forcibly removed from his home and cuffed”.

Mr Barry further said these three innocent souls were shot by the police without any reason and that as the police used a rough road to cart the cadavers, the Chief who had pretended to be dead woke up and silently jumped into the bushes.

The Secretary of the Taabita Pulaaku International said;
“We have visited the place of the crime and it’s nowhere near the highway and there was certainly no shootout as being claimed by the police and we have the evidence to back our claim”.

He asked; “How could unarmed men have engaged in a shootout with the police?”.

According to Taabita Pulaaku International as dawn approached Chief Ali used the feint crows of some cockerels to find his way to a place where by the grace of Allah he met a Fulani herdsman who subsequently lent him a phone to call his family.

“He subsequently made his way to the Bamboi police station to lodge a complaint and he was given a medical form to go to the hospital at nearby Kintampo.

“The medical Staff treated him and the medical report was sent back to the Bamboi Police for further investigations”.

Mr Musah Barry said; “These men were never robbers terrorizing the people of Savana and Bono East Regions especially Bole, Banda Nkwanta, New Longro and their adjourning communities as peddled my the police”.

He added that; “Mr Ali Igudu is not a notorious armed robber and not a robbery gang leader in Sawla and never murdered any Alhaji Ousman Amadu at Nyameafikyire a village near Bole.

Taabita Pulaaku International in their statement said
Ali Igudu upon his arrest never confessed that he was mobilizing other armed robbers for another operation along the Bole – Banda – Nkwanta Highway and he did not lead the police to arrest suspect Iddrisu who is an amputee at a different location within Sawla.

“The question is how can amputee exchange fire with the Police as claimed?”, the Fulani group asked.

Mr Barry said the police Public Relations have issued a false report in order to save face by claiming the three men arrested were highway robbers and thus they engaged in a shootout with the police.

He said; “These are all lies and we have the true version of events as whiteness by the families of the Chief as well as the innocent men slain for no discernible reason.

“We are calling on all Ghanaians to ask the police to give us a forensic report and ballistics on the so-called weapons that they recovered from the imaginary robbers.

“The police report in it’s entirety is a lie and must be disregarded”, the Fulani group stated.

The Taabita Pulaaku International further asked; “Why the very people entrusted with out protection are the ones killing us and in some places stealing our livestock, is a matter that boggles the mind.

“We are telling those responsible for this barbarism that Allah would not allow these wanton acts of criminality and senseless violence to go unpunished.

“We’re humbly calling on the IGP to come to our aid because we are helpless”.