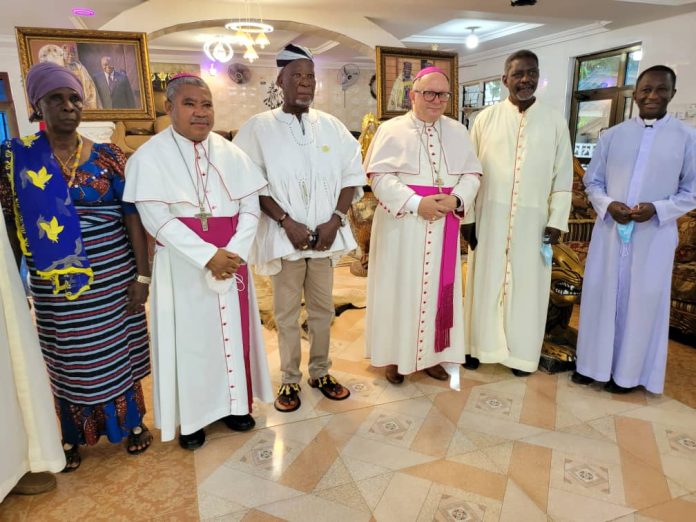 The Vice- President of the Gonja Traditional Council and Paramount Chief of the Buipe traditional area of Gonja, Buipewura Abdulai Jinapor (II) has urged the Catholic Church to venture into Agriculture in the savannah Region.

Buipewura Jinapor commended the Catholic Church for the numerous interventions and successes chalked in the newly created Savannah Region especially in the areas of job creation, education and health.

Buipewura made this comments at his Palace in Buipe over the weekend during a courtesy call on him by the Apostolic Nuncio to Ghana, H. E. Most Rev Henryk Mieczyslaw Jagodzinski and the Catholic Bishop for the Damongo Diocese, Most Rev. Peter Paul Angkyier.

He said the Catholic Church should consider venturing into Agriculture since the region is blessed with fertile lands with majority of the people in the region being farmers.

The Vice-President of the Gonja Traditional Council further said the Catholic church venturing into Agriculture means lots of jobs will be created in the region to reduce the unemployment rate.

Buipewura stated; “we pray to your Excellency to allow the Catholic church consider agriculture as part of their already existing health and education systems because a hungry man is an angry man. This region has the land, infact the largest land per tribe in the country and less populated with virgin lands available with streams ready for irrigation. I am sure my appeal would go down well into the heart of Ambassador Henryk”.

He used the opportunity to commend the Catholic church for the establishment of many schools in the Savannah Region and making education one of the best sectors of the Catholic Church especially in the Northern parts of Ghana.

Buipewura Jinapor II again asked for special prayers for peace in the region since there can never be development without peace.

H.E. Most Rev. Henryk Mieczyslaw Jagodzinski together with Most Rev. Peter Paulaul Angkyier and other priests offered prayers of peace for Savannah region and the entire Gonjaland.