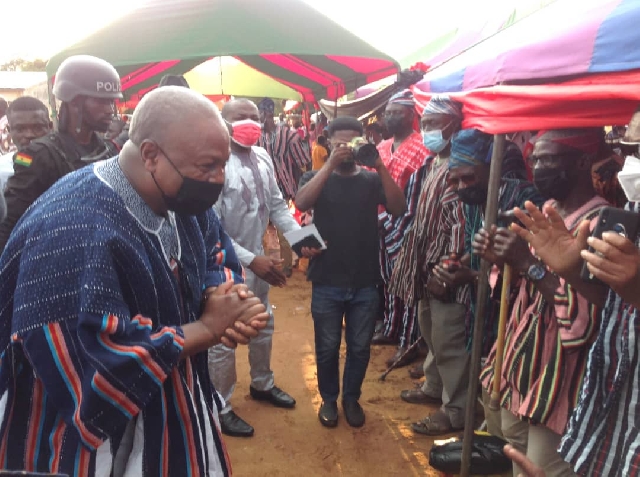 Former President John Dramani Mahama has thanked the people of the Bole-Bamboi constituency in the Savannah Region for their continues support for him since 1996 when he contested to become the Member of Parliament (MP) for the area.

Speaking in Bole on Sunday 22nd August, 2021 during the final funeral rites of the mother of his personal bodyguard DSP James Mahama, former President expressed his appreciation to the people of the Bole-Bamboi constituency for the massive votes he gathered and securing over 80% of the total votes in the Constituency.

Joined by his running mate for the 2020 elections Professor Jane Nana Opoku Agyemang, minority leader Haruna Iddrisu, party chairman Ofosu Ampofo, some national and regional executives of the NDC, Former President Mahama assured his constituents that there is light at the end of the tunnel and asked them to continue to pray for him.

Also present at the funeral in Bole was the former National Chairman of the Peoples Bernard Mornah Mornah and the 2020 Presidential candidate for the United Front Party Dr. Nana Agyenim Boateng Gyataba.

Meanwhile former President Mahama will be in the Upper West Region on Monday for a Thank You tour of the region after visiting the Upper East, North East, Northern and Savannah Regions.