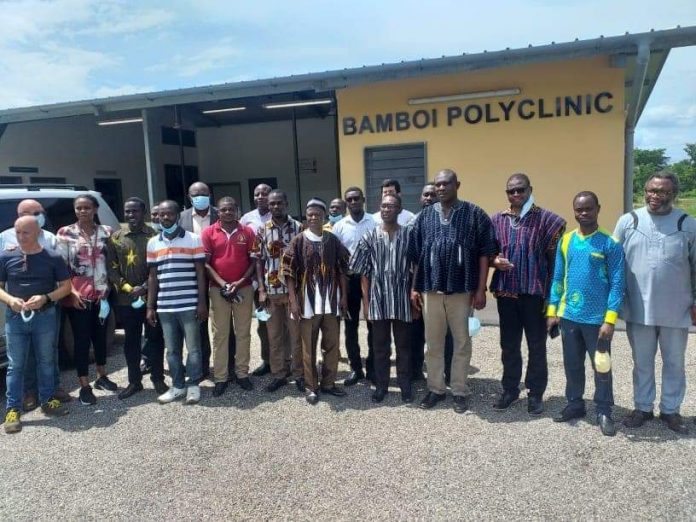 President Nana Akufo-Addo will on 12th July, 2021 commission the Bamboi Polyclinic in the Bole District of the Savannah region as disclosed during a handing over of the facility to the Ghana Health Service on Monday 21st of June 2021.

The project which was awarded on contract in the final year of John Dramani Mahama’s tenure as president is now ready for use but will be officially commissioned early next month by President Nana Akufo-Addo.

Mr Kwame Sarfo from the infrastructure outfit of the Ministry of Health said the Bamboi Polyclinic was started 4 years ago together with 5 others in the country and that they were happy to see its completion of the Bamboi facility.

He added that within 1 year the Ghana Health Service will come back to see how the facility has been put into use, maiintenance works on the facility before the official takeover from the contractors as the project has a 12 months insurance policy.

The Bole District Director of Ghana Health Service Mr Bakuri David said his outfit was happy that at long last, the Bamboi Polyclinic facility has been handed over to them. He added that plans are underway for proper land documentation for the land used for the project as it was given out by the traditional authorities.

He further stated that, workers would be deployed to the facility to see a smooth working delivery even though they still have accommodation problem.

Engineer Evans Oduro who is in charge of the project from start to finish said the Bamboi Polyclinic has a 28 bed capacity, an Out Patient Department (OPD), Radiology Xrays, Surgical Unit, Delivery Unit, Inpatient Department, Paediatric ward, A Technical Unit for Laundry, Workshop, Cold Room for Dead bodies as well as a Technical plant and a 2 bed room accommodation apartment.