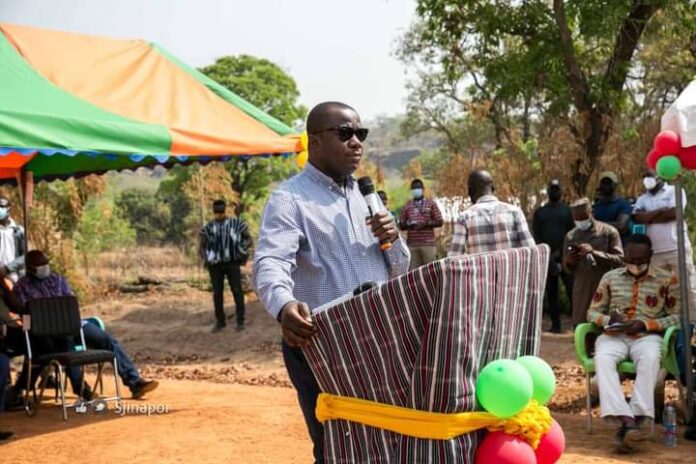 Member of Parliament (MP) for the Damongo Constituency of the Savannah Region and minister designate for Hon Samuel Abu Jinapor has on 29th January, 2021 cut sod for the rehabilitation of 5.0kms of selected roads in the Damongo township at a contract sum of Ghc24,415170.00 and expected to be completed in 24 months.

The project also include a 3.6km dual carriage road making it the first of its kind in the Savannah Region.

The road project which is expected to be completed in January 2023 will have especially vehicles going through to the Upper West Region use that particular route instead of passing through Damongo township creating vehicular traffic in town.

Hon. Jinapor in an address during the sod cutting ceremony held in Damongo used the opportunity to remind the people of the Damongo Constituency that prior to election 2020, he made a promise to open up roads in the Damongo township to pave ways for pedestrian and vehicular movement in regional capital.

He said some areas in the municipality lacks accessibility and will very soon be open up by the creation of access roads which will enable free movement of in those areas.

He spoke also about expanding the Damongo Hospital road which according to him never saw rehabilitation works since its construction under the Kuffour regime, adding that the Damongo-Kotito-Buipe road will also be worked on in the coming years under his regime as the member of Parliament for the area.

Apart from road construction, the Damomgo MP also spoke about a lot of developmental projects that the Damongo Constituency will benefit mentioning the Mole National Park and other areas.

The Savannah Regional minister designate Mr Saeed Muhazu Jibril also in address assured the people of the Savannah Region that the President’s year of roads will see a lot of roads in the region getting a facelift before the end of the year 2024.

He said again that political leadership must always collaborate with the technocrats to enhance development which he thanked especially the department of roads for the good works over the years.

The contractor for the project, N-S Naschon Company Limued in an address assured the people of Damongo that the project would be completed even before the time frame given and appealed to the government to make sure everything interms of finances are put in place for the progress of the project which the member of Parliament has assured him of the support of the government.