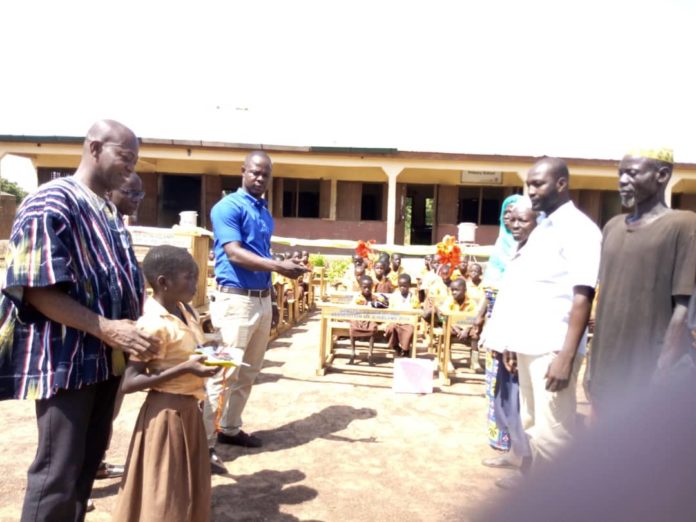 The Gonjaland Association UK/Ireland branch has donated 40 dual desks to some two schools in the Central Gonja district of the Savannah Region.

Mr Salia said the money was used to procure 40 dual desks furniture for the two schools namely Galinzegu D/A Primary and the Jiramope D/A Primary Schools all in the Central Gonja District which he supervised alongside Mr Amin Sulemana Mayoyo of Daboya.

Mr Salia further urged the  students to take very good care of the furniture and also study very hard since they are the future leaders of Ghana.

Mr Aliyu Zakariah who initiated the whole process was full of praise for the association and thanked them for listening and attending to the needs of the school.

Like Oliver Twist,Mr Aliyu further appealed to the association to support the kids with school uniforms since that is another major challenge apart from the problem of books facing the school.

Lack of furniture is a major problem in  most schools in the Central Gonja District as many of the pupils sits on bare floors in the classrooms because of lack of furniture.

The donation process saw in attendance representations from the Chief of Galenzigu, parents,pupils and the DCE who sent a delegation led by Mr Amidu Michael Wusah.